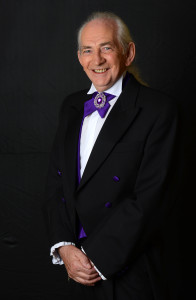 When it comes to Corporate Magical Entertainment, only one name resounds and that is Pat Fallon. He is one of the few magicians who can perform in all areas of magical entertainment arena from close up magic to a classical style full scale magic and illusion show and all points in between.

His vast experience allows him to adapt to any performance situation from a table top to a football field and is equally at home in either. From the most intimate of casual affairs to the grandest of black tie events he can provide all your magical entertainment requirements.

Corporate after dinner entertainment can simply be a cabaret style comedy audience participation magic show with or without illusions, depending on the size of the event, or for the ultimate in after dinner entertainment his magic and illusion show is a must. Elegantly dressed in white tie and tails and accompanied by one his assistant he presents a fast paced act featuring white doves, colourful silk, walking canes, candles, umbrellas, and some baffling illusions. This multi award winning act is a highly visual performance with strong up tempo music that will leave you breathless. It is a perfect choice for corporate events, banquets, fashion shows, concerts, variety shows and product launches.

Performing in front of their peers is something not many magicians ever get to experience, but Pat Fallon is one of the very few Irish magicians who does so on a regular basis with this classical act. Since becoming the first non British act to win at the British Magical Championships he has appeared at numerous international conventions all over the world including four times at the largest magic convention held in Blackpool annually.