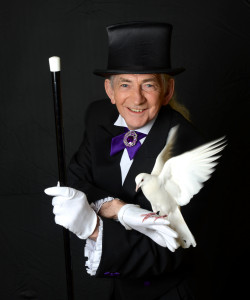 The Driving Force behind ABC Magic

Pat Fallon is without question The Irish Magician with an International Reputation. His professional career began on a concert tour with Foster and Allen in the spring of 1984 and his versatility as a performer has taken him too many different areas of the entertainment world. Since then he has appeared in some of the most spectacular arenas and prestigious venues throughout Ireland and the UK plus mainland Europe, the USA and Australia.

In addition to appearing and touring with many of the stars of Irish show business, Pat has worked as a magical advisor and consultant for Stage, Screen and Television. He has also performed for product launches, promotions and official openings for retail outlets and nightclubs. You name the situation-he’s worked it!

Pat Fallon was the first non British act ever to win the British Magical Championships in 1995 and is also the first Irish based magician ever to be a Gold Star member of the Inner Magic Circle. He was presented with the Merlin Award (the Oscar of the magic world) by the president of the International Magicians Society live on national television for the best family magic show performer of 2009. He regularly appears at some of the world’s largest  magic conventions; presenting a formal close up act, a classical stage act and also lectures to delegates on the art, showmanship and performance of magic.

With over one hundred television appearances and numerous radio interviews and performances to his credit, Pat Fallon is undoubtedly the most successful all round magician in the history of Irish entertainment.